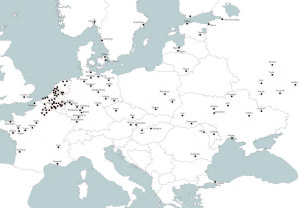 Another characteristic shared by the cellist-composers was their travelling way of life. This is the way they spread their knowledge and propagated the cello as a solo instrument.

In an age without television, radio or compact discs there was only one possibility to disseminate a musical talent: travelling and much live performing.

Servais understood this very well. He took his cello and suitcase and left home, sometimes for months on end. At that time, not all countries and cities were accessible by train or stage-coach. In Russia, for instance, he often had to travel by horse-sleigh.

At times he was the guest of royalty like William I, William II and William III of the Netherlands, Louis-Philippe of France and William IV of England. He was a much-honoured guest of czar Nicholas I of Russia and the Prince and Princess Yussupov. The later czar Alexander II also knew Servais. Moreover, he was a regular visitor of counts, dukes, marquises and princes.

The list of countries and cities where Servais called in is impressive, especially if we call to mind the conditions of travel and consider that he visited many places several times. His concert tours took him to what are now Austria, Switzerland, Czech Republic, Slovakia, Hungary, Denmark, Norway, Sweden, Poland, Latvia, Estonia, Lithuania, the Ukraine, Russia, Byelorussia, Rumania and Turkey.

His many solo performances contributed to the ‘emancipation’ of the cello as a solo instrument and put the Belgian cello school on the map of Europe.

In Servais’ career, nine big concert tours are to be discerned:

In addition to this, Servais often went on tour in Belgium’s neighbouring countries France, the Netherlands and Germany. He visited Britain at least once (1835). In his own country, he obviously also appeared: in Brussels, Antwerp, Spa, Ghent, Halle and other places.