François Servais was born in Halle, a cosy little town fifteen kilometres south of Brussels. Halle is especially known as a place of pilgrimage, and has been since the thirteenth century.

Servais grew up there, founded a family and died there. Between two trips he could retire to his villa. Halle has always kept Servais’ memory alive, even today. 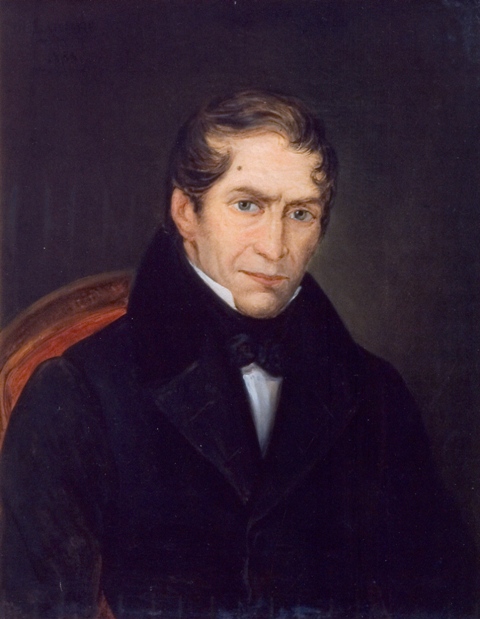 On the 6th of June 1807 François Servais was born in a simple house in the Handbooghof, a small street near the Zenne, in the centre of Halle. Father Jean-Baptiste Servais (1773-1838) was a cobbler, mother Joséphine Bande (1784-1878) worked as a maid for some families in the neighbourhood. The Servais family has Halle roots going back deep into the seventeenth century. Almost all ancestors of François Servais were true Halle people.

Two years later, another daughter was born, Pauline, who was to marry François Denayre, a baker from Halle. 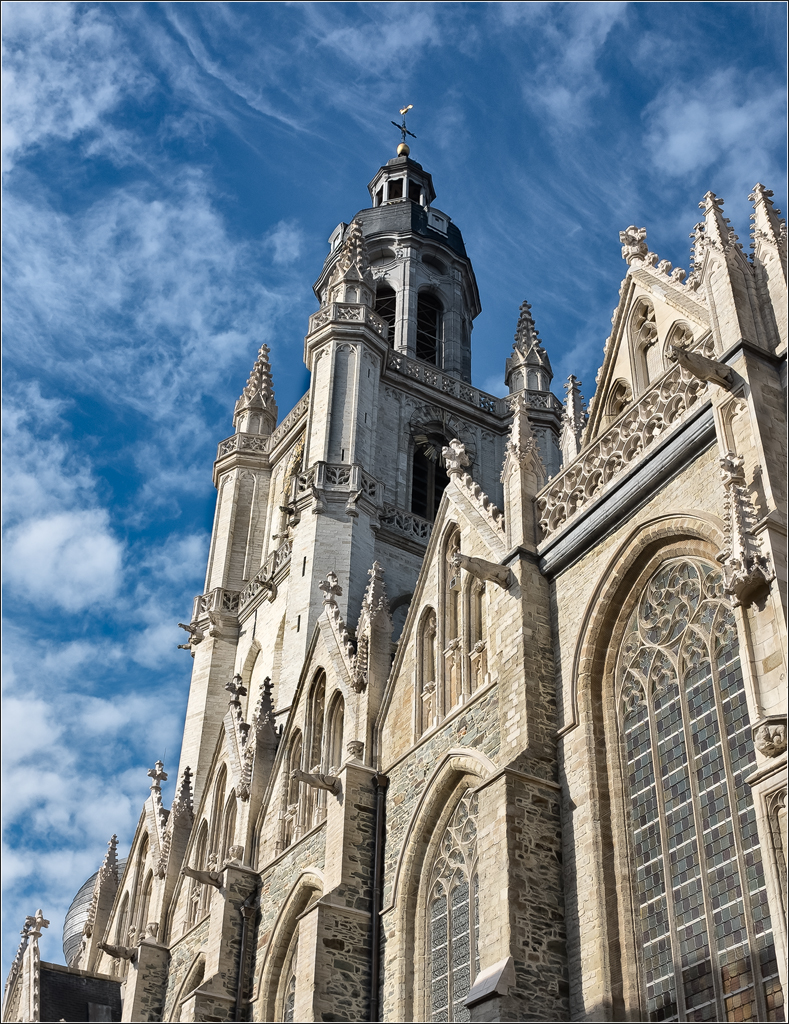 2. Member of the church orchestra

St-Martin’s Basilica, 2015
As a secondary activity father Servais played the violin in the orchestra of the St. Martin’s church. From the age of twelve François Servais was also part of that ensemble, probably as a clarinettist.

In this way he added lustre to the mass celebrations almost every day. From 1827 on Servais regularly had to abstain, because of his education in Brussels and his budding career. In 1832 he quit for good. 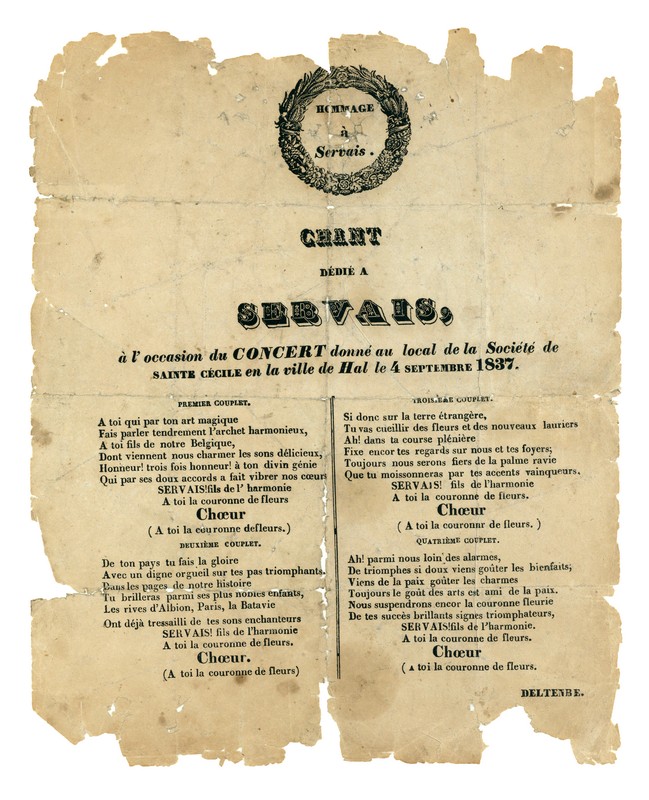 3. Musician and conductor of the Halle Harmony

The church orchestra was strongly associated with the Halle wind orchestra. It was founded in 1790 and is still active. Most likely Servais also played in that orchestra. From 1828 onwards he is said to have conducted the band as well. He made sure that Jean-Valentin Bender, also conductor of the Royal Guides’ Band, took over in 1833.

Servais remained involved with the orchestra throughout his career, first as an honorary member and from 1860 on as honorary president. Sometimes he was present at a concert or banquet and he also participated in a few occasions. On September 4, 1837, for instance, Servais performed at a concert. At the end those present sang a ‘Hommage à Servais’ – a poem written for the occasion by Deltenre from Edingen. 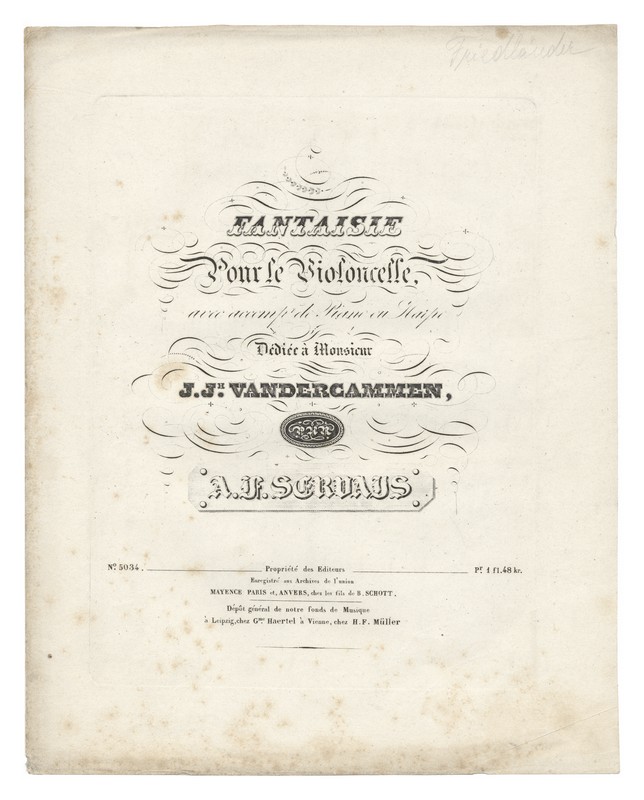 4. Opus 1 dedicated to a Halle citizen

In 1838 the well-known Mainz music publisher Schott published Servais’ opus 1, a fantasia for cello and harp. Servais dedicated the work to Jean Joseph Vandercammen (1788-1866) from Halle. Vandercammen was one of the driving forces behind both the church orchestra and the wind orchestra of Halle, and he played a role in Servais’ training. Later on he was also a witness at Servais’ marriage and at the birth of some of his children.

In Russia Servais got to know Sophie Feygin, daughter of a steward of Czar Nicolas I. They married in 1842 in St. Petersburg before the Russian Orthodox Church. In 1848 their civil marriage was celebrated, this time in Halle. The ceremony took place in the town hall on the Market Square. The first years after their marriage, they lived in Huizingen, a neighbouring town to Halle. 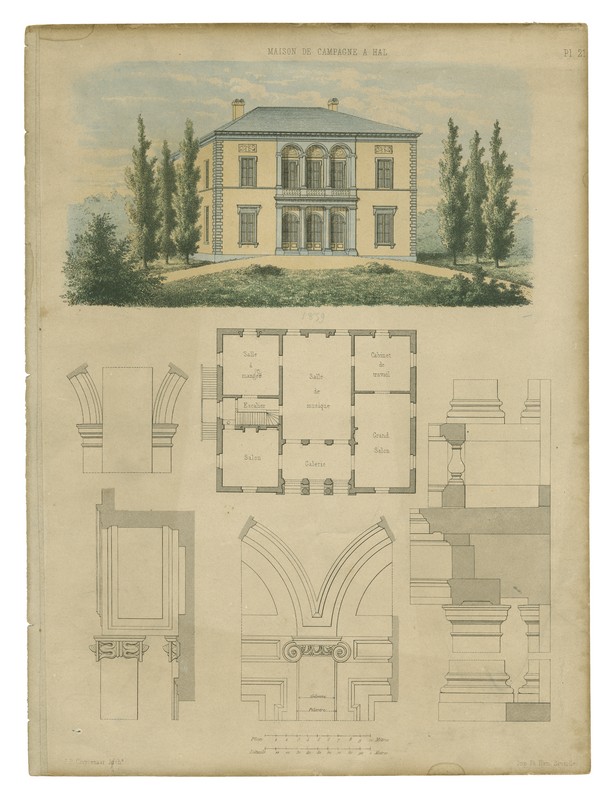 In 1847 the Servais family moved into the so-called ‘villa Servais’. The villa was designed by Jean-Pierre Cluysenaer, the architect of, among others, the Galeries Saint-Hubert in Brussels, the town hall of Dilbeek, the Château Rey in Drogenbos and the Royal Conservatory of Brussels. Cyprien Godebski, Servais’ future son-in-law, was responsible for the bas-reliefs on the façade, depicting Beethoven, Rossini and a cello, among others.

The laying of the foundation stone took place on August 20, 1847, in the presence of Servais’ Parisian friend and impresario Jules Lardin. From his villa Servais had a splendid view of the surroundings. The park stretched over a large part of the Vogelpers and the present Sint-Rochusstraat.

The second queen of the Belgians occasionally visited the Villa incognito. Misia Godebska, who went down in history as Misia Sert, spent part of her childhood there. Franz and Joseph Servais lived in the Villa Servais until 1885, although they often left Halle for longer periods. 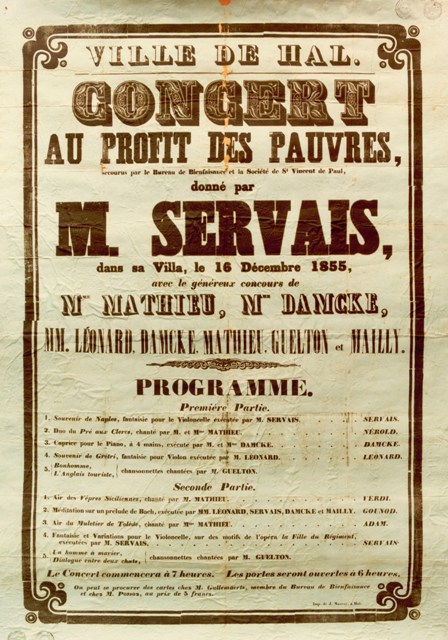 Even though Servais had launched an international career from 1834 onwards, he did not abandon his native town. Now and then he performed in Halle. Usually Servais donated the proceeds to a good cause, as was the case on 16 December 1855. The charity concert took place in his Villa and the proceeds went to the poor. Servais, Hubert Léonard, Henri Mailly, Berthold Damcke, Amélie Marin and Louise Feygin-Damcke appeared on stage. 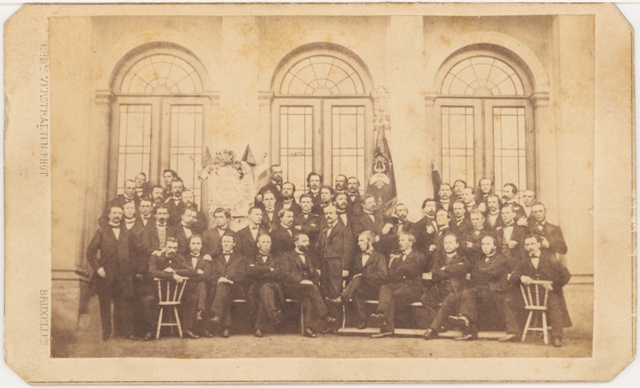 In September 1842 the ‘Société de Choeurs Roland de Lattre’ was founded in Halle. Only a few months later the choir serenaded Servais, who later became honorary president. With conductor Jules Denefve, the choir achieved excellent results at competitions at home and abroad. The choir also made concert trips to Paris and Amsterdam. In this photo, the members are posing with Servais in front of his villa. The choir had just won a prize at a choral competition in Cambrai. 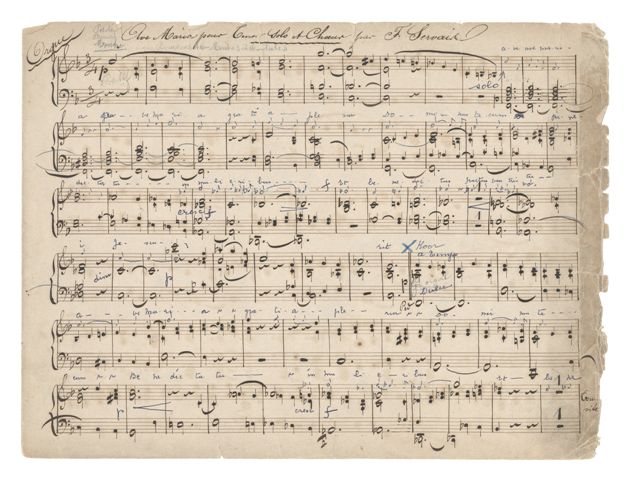 9. Franz Servais and the music life of Halle

Franz Servais was also involved in the musical life of Halle. In 1865 he became a singer with the Roland de Lattre choir. In 1866 he composed an ‘Ave Maria’ on the occasion of the 600th anniversary of the arrival of the miraculous image of Our Lady of Halle. Later he also participated in concerts by Roland de Lattre. Until the 1890s Franz kept in touch with the Halle wind orchestra. 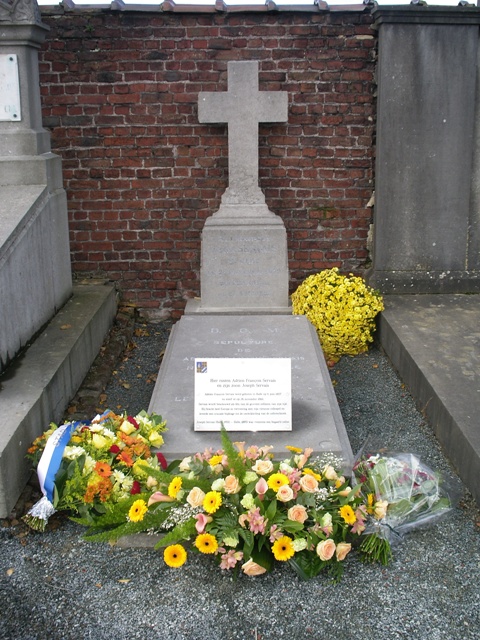 The news of Servais’ death on November 26, 1866, plunged the Halle population into deep mourning. Black flags were flying all over the town centre. Thousands of people attended the funeral three days later, paid for by the town. Among them also a number of foreigners.

Servais was buried in the Halle cemetery. Later the body of his son Joseph was interred. In 1897 the grave was moved to the new cemetery a bit further on. It can still be visited (row left of the main entrance). The grave is maintained by the City. On November 26, 2006 a memorial plaque was unveiled on the occasion of the 140th anniversary of Servais’ death. 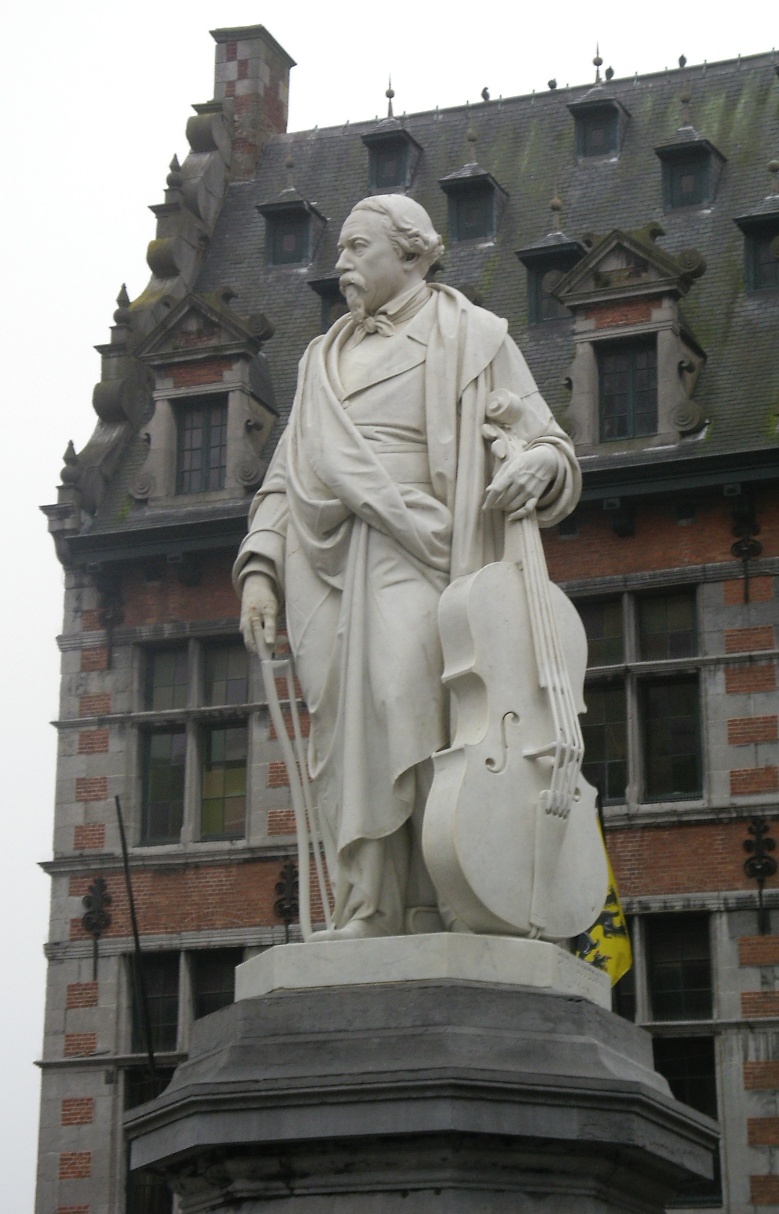 Statue of Servais on the Halle Market Square, 2007

Barely five years after his death Servais was given a statue on the Halle Market Square. Henry Vieuxtemps and François-Auguste Gevaert were present at the solemn inauguration in 1871. The statue was carved from precious Carrara marble by Cyprien Godebski (1835-1909), Servais’ son-in-law. This sculptor of Polish origin sculpted famous figures in France, England, Russia, Belgium, Monaco and Peru, among others, and taught at the St. Petersburg Academy of Arts. He showed himself a master of his craft: bow and strings were sculpted from one block. Servais was the first cellist in the world to receive a statue.

The two statues in the niches of the Halle town hall tower are also by Godebski. 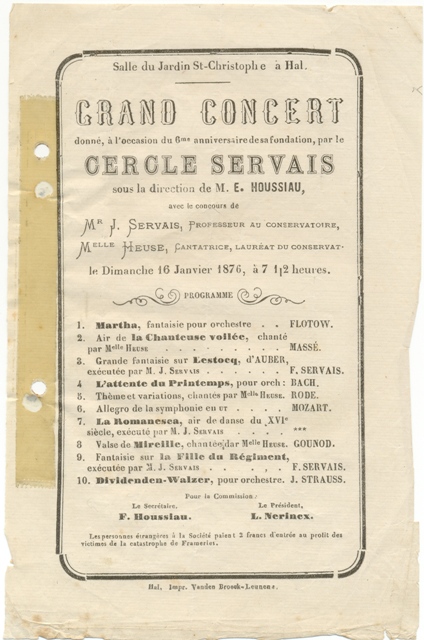 12. Joseph Servais and the Cercle Servais

The symphonic orchestra Cercle Servais was founded in 1870 to propagate Servais’ musical fame. The Halle resident Emile Houssiau was the first conductor until 1905. As honorary members Franz and Joseph Servais were regular guests at concerts and other activities. Next conductors were Jules Lerinckx, Charles De Koster and Leopold Sluys. The Cercle Servais kept on making music until the mid-1960s.

In the early years Joseph Servais occasionally performed with the orchestra as a soloist. Invariably he played compositions by his father. Joseph also kept in touch with the choir Roland de Lattre and with the Halle wind orchestra. 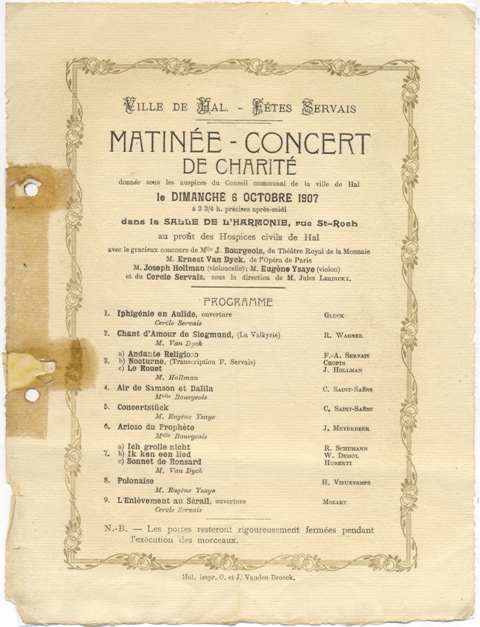 The celebration of Servais’ 150th birthday included a meeting at the town hall and a ceremony at Halle cemetery on June 6, an exhibition “Servais and his time” at the Old Jesuit College, a solemn mass with the Lady Choir on September 2, a gala concert by the National Orchestra of Belgium on September 22 and a “Symphonic Concert “A. François Servais and his time”” by the Servais Circle on October 29, 1957 in the Concordia hall. At this concert the Halle cellist Maurice Deneulin played the solo in Servais’ Concerto en si mineur. 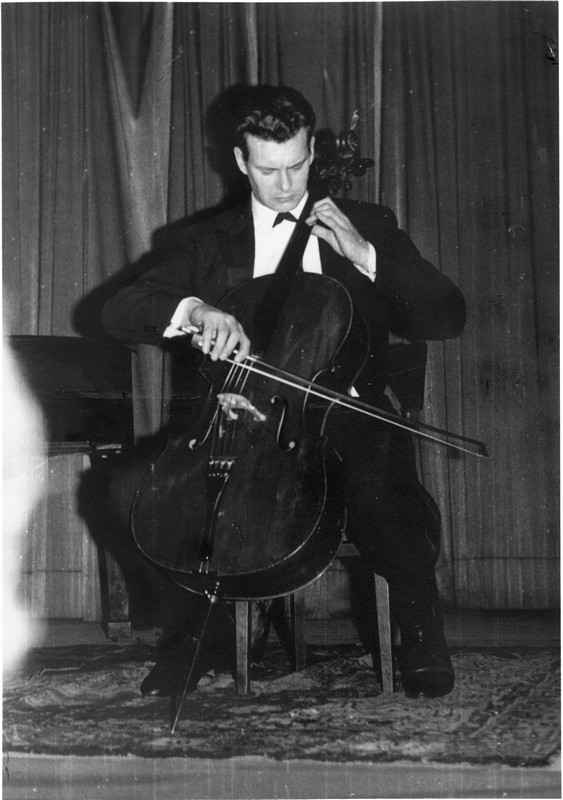 This recital was part of the commemoration of the hundredth anniversary of Servais’ death. Van de Velde performed two works by Servais. Still on the programme of the commemoration: a ceremony at the grave, an academic session and a solemn mass on November 26, 1966 and an exhibition at the Villa Servais. 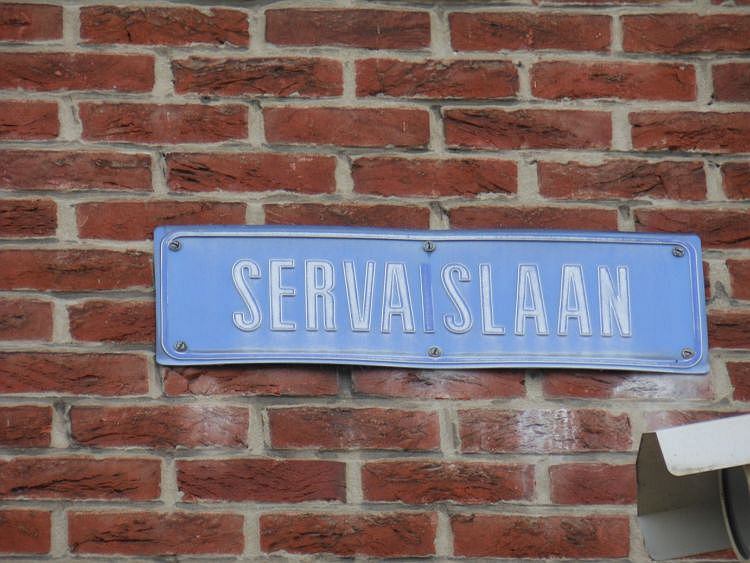 Around 1900 a street was named after Servais, the current Leeuwenstraat in the city center. In the early 1950s the side street of the Vogelpers, which gives access to the Villa Servais, was named Servaislaan. 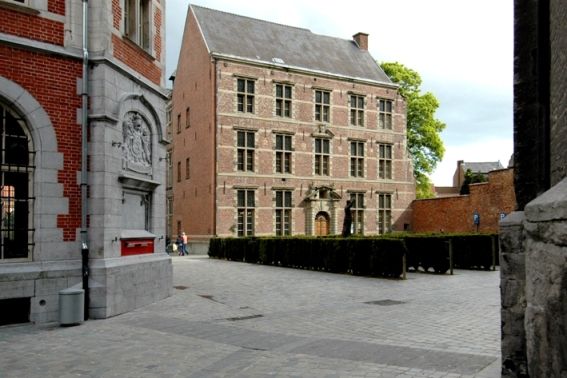 The former Jesuit college next to the basilica houses the Halle music academy. Since 1997, this academy has been called the Municipal Servais Academy for Music, Word and Dance. The concert hall on the first floor was renamed the Servais Room in 1987. 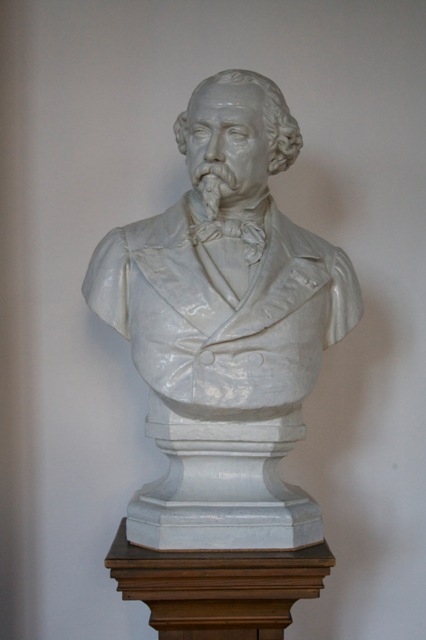 In the Servais Room of the Servais Academy, to the right of the stage, is a bust of Servais, made by Edmond Lefever in 1880. 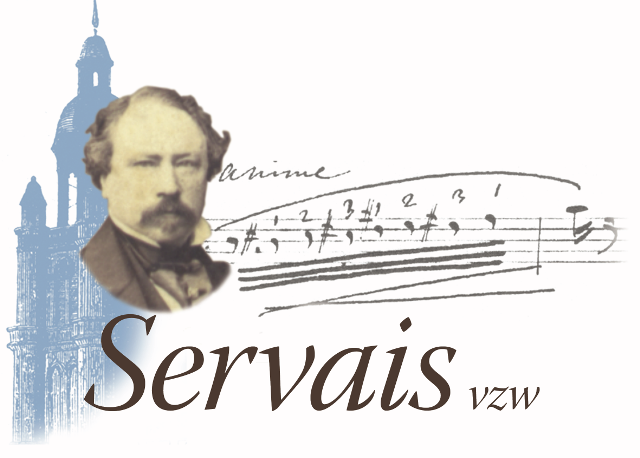 From 1985 to 1992 a concert society called ‘Adrien François Servais vzw’ was active. It organised about thirty concerts with renowned artists. Three times the programme included music by Servais. The society also organized an exhibition, together with the Zuidwestbrabants Museum, and an album with music by Servais.
In 2003 the Servais Society was founded. The Servais Society wants to contribute to the study and publication of the life and work of François Servais and his descendants. In addition the Society wants to function as the international contact point for everything that has to do with Servais. In the meantime the Society has organised dozens of concerts, exhibitions, lectures and other activities, has published two CDs and several books. At each of the concerts works by Servais can be heard.
Read more about our Society under the heading ‘Servais Society’.

In the 1980s the Halle regional museum started a music collection. Since its foundation the Servais Society has been working on the further development of this collection. The Servais collection comprises thousands of scores, photos, CDs, objects, letters, programmes and other archival materials. A part of the collection was exhibited from 2004 to 2015 in the permanent exhibition ‘The Servais Family and the Music Life in Halle & Europe’.
The material was also shown during the major exhibition “Adrien François Servais 1807-2007. Halle cellist of world fame” in the former Post Office and the Historic Town Hall in Halle. From 2016 onwards, some special pieces are on display in the new museum in den AST, Meiboom 16 in Halle. 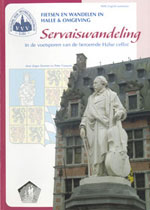 Cello virtuoso François Servais (1807-1866) travelled around Europe and was very successful. However, he also remained loyal to his hometown Halle. A guide tells you about Servais’ life and work and takes you to special places from Servais’ life, such as the Saint-Martin Basilica, the Market Square, the Handbooghof and of course the Villa Servais.

The guided tour takes about 2 hours and includes a walk, a visit to Villa Servais and a drink at Villa Servais.